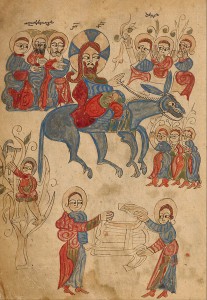 My favorite musical is Les Miserables for many reasons. On a personal note the musical represents an important milestone for my married life with Sarah.  On October 18, 2002 we went on our first date together.  We knew each other well but that was our first official date.  We went to see Les Miserables.  And exactly one year later, October 18, 2003 we were married here in this sanctuary.  I feel incredibly blessed to have Les Miserables to be our first date.  The powerful themes of mercy and love are great truths to build a marriage upon.

I won’t go into the details of the plot now but I would like to emphasize two contrasting themes pitted against one another: the revolution from a political uprising forms the backdrop of the revolution of one man’s heart. Jean Valjean is the main character who was a criminal and has an experience with a priest that changes his life.  The priest could have turned him in and sent him to jail but instead granted him grace and a chance to start his life over.  That one act starts the revolution of the heart in Valjean.  He becomes a man that embraces the radical teachings of Jesus from the Sermon on the Mount; meanwhile the world around him dissolves into political turmoil.  The musical number that provides a theme to the political turmoil is, “Do you here the people sing?”  The chorus goes like this-

“Do you hear the people sing?

Singing the song of angry men?

It is the music of the people

Who will not be slaves again!

When the beating of your heart

Echoes the beating of the drums

There is a life about to start

To incite his friends to the revolution, one of the student protestors asks-

“Will you join in our crusade?

Then join in the fight

That will give you the right to be free!”

Again let me state, the song provides a backdrop for a political revolution, meanwhile another revolution is playing out in the lives of Valjean and those around him- the revolution of the heart.

In Jesus day there was a sense of growing unease and many were calling for a political revolution. In our reading today we see that many of the followers of Jesus saw him as king, which he was.  They expected Jesus to start a political revolution and restore Israel to its former glory- a country free from Roman rule or for Jesus to lead them to a new nation/state.  Either way the hope was for Jesus to provide them with political liberation.  Who among his followers could have known that that Jesus’ revolution had already started?  Jesus said it best, the kingdom of heaven is like a mustard seed- the smallest garden seed but it will grow to become the largest tree in the garden.  Jesus’ revolution starts as a revolution of the heart- and Jesus is about to provide the ultimate example to confront the powers.  The way of the cross- that we would be people of the cross- confronting injustice and evil, transformed from the inside out- free to love and free to stand for God.

As in Jesus’s day many today in America want a political revolution as well. Some are looking at the presidential candidates to ignite that revolution and the two figures that stand out are Donald Trump and Bernie Sanders.  There are people who would vote for either one just to shake up Washington even though the two have very different ideas about how they will do that.  Their slogans represent two different approaches with Donald Trump saying, “Make America great again.” And Bernie Sanders, “A political revolution is coming.” One says in a sense- we need to go back in a revolutionary way- send them back, if they have a problem send them all back, and tighten up the ranks- while the other says in a sense “Let’s go forward in a revolutionary way and make the rich pay for it.”

History attests to the frequency of revolutions, we’ve seen them before and should be cautioned against letting anger and raw emotion rule the day. Case in point we have the revolutionary figures of Hitler and Stalin who seem more radicle to us now than Trump and Sanders but bear in mind their slogans would have been exactly the same.  Hitler wanted to make Germany great again by sending them back and Stalin wanted to make Russia great again by making the rich pay for it.  My point is not to strike fear into our hearts but a healthy dose of reality.  When people speak of revolution we need to ask, Revolution to what and think through the ramifications.

Perhaps there is a quiet desperation lurking within our nation. People want a higher calling to lead us out of this pervasive sense of meaninglessness.  As Ecclesiastes states, “Meaningless, meaningless, everything is meaningless.”  Or in other translations, “Vanity, vanity, everything is vanity.”  Yet vanity pervades our postmodern existence and we see people floundering around.

On the opposite spectrum to political revolution we witness today many people embracing yoga and meditation to find inner peace. There is a sense that we need a spiritual revolution.

Today people are desperate for a revolution. Do you hear the people sing?  Singing the songs of angry men?

Indeed Jesus is a revolutionary and spiritual guru who offers us himself. It is a mustard seed revolution.  A political revolution that starts in the heart- changes us from the inside out- frees us to live for God and we can follow the example of Jesus Christ.  It is the way of the cross.  We are called to take up our cross daily deny ourselves and follow.  We are also called to confront the social evils of the day and embrace the hurting and sick because the revolution of the Jesus Christ, the way of the cross, is a revolution of love.

As believers of Jesus Christ may we attest to the coming kingdom of God? The mustard seed will grow and become the largest tree in the garden (although not technically a tree in the scientific sense).

Through the cross and the power of the resurrection, Christ has overcome the powers

From the powers of sin- he frees our hearts

From the powers of the state- we have a freedom and hope that is more profound than political freedom.

While people all around us are calling for a revolution we called to already be living one. History has seen revolutions before.  Nations rise and fall but those who embrace the mustard seed and nurture it in the heart- though it is the smallest seed, it will become the largest tree in the garden.  We can use the final song in Les Miserables as our song- the song of those that embrace the mustard seed revolution.

“Do you hear the people sing?

Lost in the valley of the night

It is the music of a people

Who are climbing to the light

For the wretched of the earth

There is a flame that never dies

Even the darkest night will end

And the sun will rise.

They will live again in freedom

In the garden of the Lord

We will walk behind the plough-share

We will put away the sword

The chain will be broken

And all men will have their reward!

Will you join in our crusade?

Somewhere beyond the barricade

Do you hear the people sing?

Say, do you hear the distant drums?

It is the future that we bring

Will you join in our crusade?

Somewhere beyond the barricade

Do you hear the people sing?

Say, do you hear the distant drums?

It is the future that we bring

The mustard seed revolution is assured of a bright tomorrow! Has it come into your heart?  Is it growing?  You can be assured that this revolution will never die!

« Read the Bible Through
Prayer Walk »

Joey is currently the associate pastor at Woodruff Place Baptist Church. He lives with his wonderful wife Sarah and has three children. They love living just a couple blocks away from the church and greeting their neighbors on their way to and from church. Their community on the Near Eastside of Indianapolis is especially important to them. Joey loves his church community and guiding the congregation during this exciting time.